Well, here we are again. I somehow miraculously survived the spring of 2015, which included at least three months of horrible (HORRIBLE) winter weather, two months of Lady F convalescing with me in New York (she is now in much better shape, thanks), enough work for three of me (the “me” from when I was young and energetic), and lastly the great and nearly-fatal tumble down those blasted Morningside Park steps, still in need of repair and a damn handrail. And here I am again, on the other side of the Atlantic, back in my beloved Barcelona, which last summer I spurned for Bilbao and other points North. So exciting to fly into that familiar landscape!

I have been here for just over forty-eight hours, although most of it is still a jetlagged blur; I slept all of Monday when I arrived, except for a brief saunter to the Mercat de Santa Caterina for the First Meal of, what else, croquetes casolanes (because I could eat myself to death with croquettes), pebrots de Padró, and my FAVORITE, grilled calamari in the typical Catalan garlic/parsley sauce,

all of it ordered in not-as-rusty-as-I’d-feared Catalan and consumed with, what else, CAVA, over a newspaper spread proclaiming what we all know, that Messi (Messi, Messi, Messi!) is not of this world. Because, days later, the “locals” are still raving mad about THAT GOAL at the Barcelona-Athletic Club Copa del Rey final (and so am I).

The First Meal ended, inevitably, with a turró (nougat) ice cream cone from Planelles Donat at Portal del Àngel #7. And don’t argue: it has to be from that particular location of PD, and no other establishment, please. I will begin minding the diet just as soon as I’ve tasted all the must-haves at least once.

Got back to bed, and on Tuesday I set my alarm for 10:30 a.m., as per my foolproof anti-jetlag system (sleep for an entire 24 hrs upon arrival, you’ll be set to go at a normal time on day 2). Unfortunately, it seems as you get older that must turn into sleeping for an entire 48 hrs upon arrival, as there was no getting me out of bed before 3:15 p.m. At which point I had occasion to inspect my ULTRALUXE Airbnb apartment, which is interestingly outside my usual neighborhoods, in the Barri Gòtic or, as the Ex immediately labeled it, Guiriland. I live on the fabulous pedestrian Carrer de la Portaferrissa, so named for being the site of one of Roman Barcelona’s gates, and now most famous perhaps for leading to another little street, Carrer Petritxol, known as one of the quaintest little corners of Barcelona (more on that in a later post).

My ULTRALUXE woman-cave is in a building that looks pretty medieval itself, although its modern history seems quite interesting too. I found out from my friend Mr. A, who knows EVERYTHING about Barcelona, that it used to house the Casa Regional de Murcia y Albacete (casas regionales were social clubs for people outside their province), and someone on the internetz reports that it didn’t close during the 1936-39 Spanish Civil War, continuing to hold a dance party every Sunday throughout. I did find a program for a theater performance as late as 1958:

Held in MY VERY OWN APARTMENT (or rather, the floor of which my apartment is now 1/6th or 1/8th). I do believe the Casa remained open at this location until ten or fifteen years ago. However, something else I found when looking this up is that in the 1920s you could come here to buy TOP-QUALITY Catalan Arbequina olive oil (curiously the same kind I buy at Fairway Market in NYC): 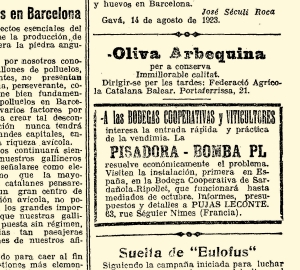 In this day and age, my building’s claim to fame may be to have the only front door not covered in graffiti or piss in the entire Barri Gòtic, something for which I may have the Manta salesmen to thank (at almost any point you may buy folkoric fans and castaignettes from a guy outside my gate). Immediately inside is a beautifully serene entryway with inner patio: 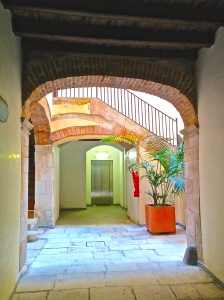 That little staircase (which I don’t take because after the Great Morningside Tumble of 2015 I am DONE WITH STAIRS and a BCN place that’s not a walkup is true luxury) leads to a fabulous space purportedly decorated professionally by a studio named HOME-DECO, and featured in the magazine Interiores because of the to-die-for fireplace (that IS my fireplace, too bad it’s summer!). Though I’m not sure I’m “at home” in the apartment yet, it is definitely one of the most palatial I’ve ever rented, if not terribly “medieval” in style (except for the volta catalana arches preserved in the living-room area). 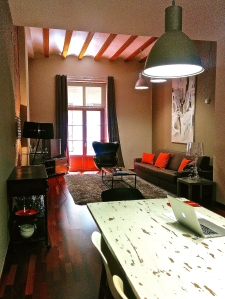 Every time a classified reads “loft” I think “studio,” but it’s actually huge, which makes it strange that they decided to keep it as a no-wall space with the dining table right in front of the bed. Also, despite the enormous windows facing three sides, it’s not that bright. The CFL bulbs in the industrial light fixtures (do I have a steampunk apartment???) don’t really enhance the sultry olive skin tone I plan to acquire very soon. The graffitiesque artwork is a bit disturbing (guess I avoided it downstairs not upstairs). And there are… words all over the headboard.

Words that do not exactly match my habitual moods when I’m in bed (like coño, WTF, or oohlala!). THAT SAID, the little indoor garden on my floor is the cutest thing (I’m not actually sure I’m allowed there, but I tiptoed through it). The double-pane glass makes for complete silence (also true luxury in BCN); there are THREE indoor units for the multi-split air conditioner (very silent as well); and that black leather Arne Jacobsen-style Egg Chair may or may not be an original orgasmatron–it is the most comfortable thing I’ve ever sat on. So comfortable, in fact, I’m hallucinating about buying a small desk so I can work there.

So, on the evening of the second day (Tuesday), after a bit of home exploring, I met Messrs. A & S for dinner at La Monroe, the little restaurant at the Catalan Film Archive. Very reasonably priced, and quite tasty; I had a culturally incoherent dinner consisting of (shared) Nachos and a second course of secreto ibérico. And then it was midnight, and Mr. S’s FIFTIETH birthday, which we celebrated by the full moon on Carrer Petritxol: 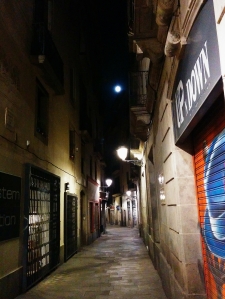 Today (Day 3), I managed to get out of bed–if not to be actually awake–by 11:30 a.m. I bought the ugliest (and cheapest?) shopping cart ever, and got some basics. I ran some secret errands with a secret friend. And managed my first home-cooked meal of the summer, the very Catalan botifarra amb mongetes, on my fancy made-to-look-like-a-repurposed-door-with-peeling-paint dining table: 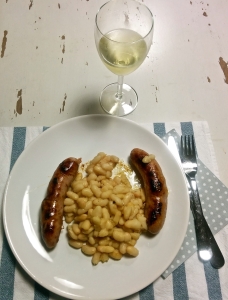 So here I am! It’s 2015, Barcelona this time. (No Basque vocabulary needed, but you can send a little Mikel this way anytime!) I’ll write from time to time with a travel diary, Barcelona tidbits, and miscellaneous miscellanea. Since I have SO MANY FRIENDS who know the city and the area, I hope they’ll use the comments section to add their own recommendations (for me, for whomever might read this).

I’m here for work (yes, sigh…). For FRIENDS. For FOOD. For Barça (see you on the night of the European Cup final, June 6!). For my old and forever boyfriend Carles Puyol, and my new boyfriend Luis Suárez (yes, somehow that happened). Most of all, for TWO MONTHS!