Museum, Mundaka: From Polychromes to Rip Curl (and Shopping)

Then came another brief visit, this time from Messrs. J & F, and time for a bit more explorin’ (and, if I don’t finish this chapter, some splainin’). I decided to take them to the other jewel of the Bilbao art circuit, the very fine Fine Arts Museum. Although it has existed for over a hundred years, it was beautifully renovated in 2001 (Guggenheim side-effect, I suppose) to showcase a considerable collection of international, Spanish, and Basque art from the twelfth to the twenty-first centuries (we loved the little “S. XX-XXI” gallery sign, it doesn’t seem like many museums have those yet!). Temporary exhibits were pretty much forgettable (for me), except perhaps for “The Grecos at the Bilbao Fine Arts Museum” which nevertheless disappointed because despite the great fanfare of the title (on the fourth centenary of the painter’s death) it included only two works, St. Francis in Prayer Before the Crucifix and The Annunciation. Still, each original painting is accompanied by light boxes with X-rays and infrared reflectograms to give an idea of El Greco’s process, as compared to that seen “behind” what is now widely considered a fake, the Penitent Magdalene (which I was happy to learn was sold as the real thing to none other than Antonio Cánovas del Castillo).

The permanent collection features other important, interesting, fascinating works that I (not being an art historian) will not try to describe; you can link to some of the best-known ones from the last paragraph on this page. I do find Orazio Gentileschi’s Lot and his Daughters singularly hypnotizing. According to Mr. F, who is an artist, it must be because of its impeccable triangulation, and how the interplay of the three primary colors (and subtle combinations thereof in the details) visually mirrors the relationship between the three characters. I think it’s more because of how Gentileschi represents the seduction of Lot by his daughters in the aftermath of Sodom and Gomorrah’s burning: the emphasis (already, granted, in the biblical story) on his unwitting participation in the incestuous act, ascribed entirely to the daughters he had previously offered to passersby. By the way, you too can touch Lot’s poor daughters at the Touch Art initiative, where some of the museum’s works are reproduced as textural panels to be experienced (through spoken description and touch) by the visually impaired. I discovered I would be in real trouble if I went blind, since I couldn’t tactilely recognize anything at all (guess the perennially numb fingers from broken neck incident don’t help).

Aside from all the nineteenth-century art, particularly the many Zuloagas, my favorite objects in the Bilbao Fine Arts Museum are Quintín de Torre Berastegui’s spooky wood polychrome sculptures from the 1930s-50s. Spooky because wood polychrome was traditionally used in Spanish Baroque religious art partly as an alternative to expensive materials like marble or bronze, and partly because the Catholic Church insisted on the most vivid hyperrealist representations of martyrdom and crucifixion–and sometimes pretty attractive virgins–to hit the many ignorant faithful (kept so by the counter-reformation) on the head with doctrine. So an incredibly skillful and elaborate art form emerged to convey the ideals of self-denial, shame, sacrifice, suffering, and death that ground our Catholic culture. 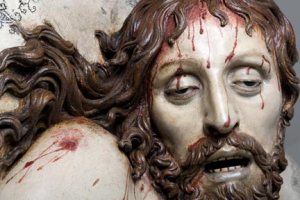 Credit for the image above goes to this very interesting art history blog, which in turn refers to this fabulous 2010 National Gallery exhibit.

[If I’m sounding especially sour on religion it’s because aside from great art it’s mostly given humanity evil and death, as in the current horrible insanity in Israel/Palestine.]

Anyway, Quintín de Torre takes up religious polychrome in the twentieth century and indeed produces images for churches and processions. One example is at the Bilbao museum. But the works that really strike me (and that I’d like to see as parodies although I’m almost certainly wrong) apply the genre’s techniques to everyday Spanish types from the Second Republic, Spanish Civil War, and Francoist periods. 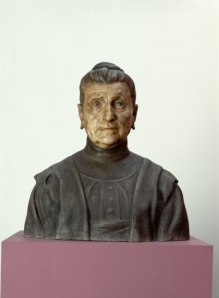 Everyone I know hates these sculptures, and the word “kitsch” has been uttered more than once, but to me the Bust of an Old Lady, the Cantabrian Girl, and even the seemingly innocuous cafe-society Portrait of a Young Woman, rendered in the meticulous carving and painting of policromía, transfer the ideological associations of seventeenth-century religious art to the figures of people who had to go about their lives amid the poverty, turmoil, and political repression of early- and mid-twentieth-century Spain, so rooted precisely in religious conflict (intertwined as usual with class, of course). The braided girl, especially, has that “living dead” face one often sees in Civil War and early dictatorship film footage. And let us not forget that, like the early-1600s statue of St. Ignatius of Loyola by Juan Martínez Montañés, 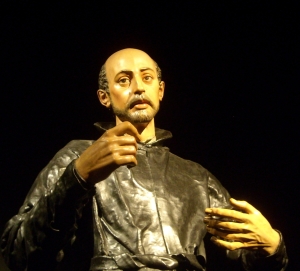 Well, that was depressing. So for day #2 of J & F’s visit we arranged an excursion. I really wanted to see the Pozalagua caves or the flysch geopark, but we only had a day and, as we know, no one around me deals well with early starts. It was, curiously, not only the feast of St. Ignatius of Loyola (a local holiday on account of his birth in nearby Azpeitia) but an unusually sunny and warm day, so despite the threat of too much bonding with The People, on a friend’s excellent advice we headed for the town of Mundaka–a one-hour train ride away and world-famous, as it turns out, for its surfing importance. Since that peroxide-haired, puka necklace-wearing high school sweetheart whom I used to follow to this little island (in Puerto Rico not Spain)

on an actual surfboard (but not in actuality surfing), the only wave I’ve been known to ride has been at a soccer stadium. But I was tremendously excited to find out about this once endangered left-handed rivermouth wave (whatever exactly that means) and its… resurgence (notice my astonishing ability to always find the perfect word for the communicative situation).

IN ANY CASE, I saw lots of beckoning bollycaos: 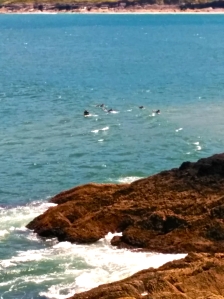 Ok, more walking and swimming away from than beckoning me, but I was once again sporting a gay couple adornment so it wasn’t a good time anyway. I did, however, get to watch them surf!

And I went to the low-tide estuary beach; even wore my decorous old-lady bikini (not photographed for posterity, thank you) and no one ran screaming from the shore. 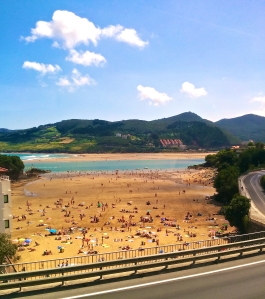 For a moment, I thought it was the most sophisticated and fantastic beach I had ever been to… 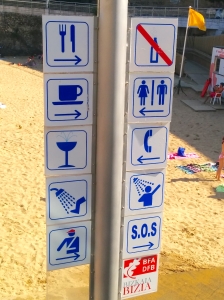 but Messrs. J & F scoffed at my interpreting that third sign on the left as “champagne this way.”

Surf and beach aside, a stroll through the charming town was a treat in itself, with its beautiful port, its old chalets and casino, lunch under the trees, and the inevitable hilltop church (no beer available either, though).

Another easy train ride, and back to Bilbao for a little shopping (everything on sale at Mandarina Duck! everything on super-sale everywhere, this being the beginning of August!). Details on Le Dining, not to be forgotten… I took J & F to my two favorites, Epelde & Mardaras and Restaurante Kokken, where we all had the INCREDIBLE seven-course menu and (jointly) consumed two bottles of wine, all for 79€. Everything followed by an after-dinner drink at Lamiak (where the boys imbibed arroz con leche- and chocolate/cherry-flavored orujo, of all things).

Now… alone again, naturally. And with a load of work to do and six days left to going home…