Bilbao Miscellanea I: With Notable Citizens, Feats of Engineering, a Palatial Paladar

Warning: Do Not Read If You Are Easily Grossed Out

I am blessed with unthinkably fabulous friends. However true Miss LG’s assessment that what I find most attractive in a gentleman is not dimples but Asperger syndrome (no offense to legitimate sufferers of this disorder, please!), my buddies are unfailingly smart, engaging, funny, and generous. Miss H and Miss M, Miss G and Mr. Chxyzk, Ursula, Cruella, Ooh La La, Mr. V, Messrs. J & F, the Welcoming Committee, and many others a) love me despite my occasional bouts of

b) provide therapy during my random bouts of

and c) take care of me through my propensity to interrupt our cavorting by contracting chicken pox, getting my neck broken,

or finding myself bitten by a Lyme Disease tick (be thankful I destroyed the bull’s eye rash pic after accidentally uploading it to the DMV while contesting a traffic ticket). Some, like most recently Miss L, Miss R, and Messrs. L & M, often follow me in my globetrotting hoping my disaster-proneness won’t rub off on them (or perhaps that I’ll be their lightning rod). Others I make a point of seeking time and again in my travels, perennially drawn to their warmth and bon vivance.

So I come to speak of Miss I, Notable Citizen of Bilbao, of my friendship with whom I’ll just say it dates back to the paleozoic era, when we both simultaneously got our PhDs (at different places) and landed jobs (at the same university) in what we then and even now, perhaps unfairly, considered Hell Frozen Over, i.e. Rochester, NY. Our friendship is older than my bollycaos, and has lasted through any number of jobs, transatlantic moves, new boyfriends/exes, childbearing and rearing (only in one case), etc. And although some of my friends consider me a pillar of strength (except in situations a, b, and c above), I am a helpless twit compared to Miss I. She compassionately nursed me through the horrible breakup (“honey, get over it: he’s leaving; would you rather drag from his ankle or glamorously chill out over champagne at a fancy bar?”). And devilishly steered me into spending as-yet-unearned money on frivolous luxuries I’ll treasure forever:

(Abovementioned purchase–Maria Frantzi ring–dated 2010 right here in Bilbao at the totally chic S’Ad Joyas; this is after all a travel log.)

and, mind you, she is even more ancient than I am. Do not label me narcissistic; she is also even more brilliant than I am (gasp!): illustrious Basque scholar and linguist (first theoretical and now neuro-, as in she will stick electrodes to your forehead and play with your mind). Because she is also a born storyteller and thus also an even better teacher than me, her engrossing neurolinguistics blog does a great job of conveying to the layperson why Nelson Mandela’s language abilities gave him an edge in negotiating with F. W. DeKlerk over apartheid (which might explain why I am only capable of telling people I love them in English), the communicative importance of function words like articles and prepositions, and or how “balanced” and “unbalanced” bilinguals use different parts of their brain in linguistic functioning (perhaps related to why I become no-lingual after switching from primary English- to Spanish-usage for a week or more).

But the real relevance of everything above in this blog (other than allowing myself the gushing) is the aforementioned Notable Citizen of Bilbao aspect. Because over a drink and pintxos at the popular Bar El Globo

she will instantly design a wonderful road trip itinerary for you, and tell you all about where you should and should not eat. Tip: all those attractive terraced restaurants in the Old Quarter that beckon you… don’t go there. Except maybe for the Restaurante La Peña Athletic, for whose very decent prix-fixe midday menu I can vouch. Very sadly, their web site does not include the menu’s English version, but on the paper version they (too) have adorable translations so you can, if you like, eat “hopeful figs.”

Unfortunately, you can’t call Miss I. But I will let you know about a couple of entertaining things that I would not have been able to do with Messrs. M & L (another two of my excellent globetrotting pals) had she not told us about them.

The first one was an unbelievable dinner at Epelde & Mardaras (web site temporarily down as I write), which is not exactly a restaurant but more like a Cuban paladar. It is, strictly speaking, an art gallery (full of works you can buy) housed in a palatial nineteenth-century haute-bourgeois home.

As–you’ll remember–a specialist in the period, I’ll tell you that 1800s Bilbao became very rich as one of Spain’s earliest industrial centers. It so happened that in 1855 a British engineer named Henry Bessemer invented a process to reduce the cost of manufacturing steel. As I understand it (humanist not scientist–anyone who knows better feel free to intervene), his converter’s ideal operation required both a type of iron with very particular chemical qualities and a fuel known as coke or, in Spain, cok (yes! just like penal/penile–I love it!), both of which were uniquely available in the Basque Country. Hence the first Bessemer converter was installed in Bilbao in 1862, and things took off from there. The broad ría or estuary–whose history you can explore in more detail at the excellent Maritime Museum–also made Bilbao a privileged port city, whose northern location (or was it eastern? or western?) efficiently connected it to England (and English culture has left a deep trace in the Basque Country).

Credit where credit is due: I don’t know all of this because I’m brilliant (which I am) but because of a masterful doctoral dissertation written by my student Mr. O. You can find out more when his book comes out (and Mr. O, if you’re reading this, get your ass to work right now!). But BTW if you want to read a (Spanish-language) novel that will give you a picture of this whole scene and put you in a Bilbao mood, read Vicente Blasco Ibáñez’s 1904 El intruso (The Outsider) (he was Valencian, thus the perspective on what he saw as a very closed society).

ALL OF WHICH GOES TO EXPLAIN how homes like the one in which Epelde & Mardaras is located came to exist. Then of course things got totally f*ed-up in the twentieth century, and Bilbao started sucking through the renaissance commonly related to the 1990s inauguration of the Guggenheim. Enter Ms. Emilia Epelde, who with her partner Mikel Mardaras specialized (since around 2000) in staging art exhibits in abandoned industrial spaces. They obtained the giant flat (untouched since the 1800s) to use as a gallery, and although they have made many renovations it still vaguely feels like the ruins of a bygone era. With the incipient Spanish financial crisis came the gastronomical part.

Technically, the very reasonable prix-fixe pays for your leisurely get-together in a gorgeous private room; as a gesture of hospitality, the gracious hostess creates and offers you a meal based on the day’s market products (you can of course choose meat/fish/vegetarian and such). She is known for her fish soup and seafood

because she often brings the day’s catch from her weekend digs in Mundaka, but other fare is equally appetizing. And the big deal about eating here are the glorious spaces. Like the Arabian room: 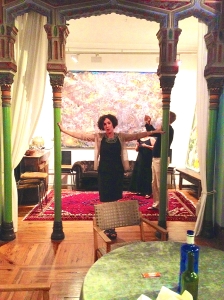 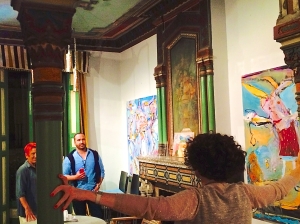 (which made Miss I all Judy Garland). Or the common areas (you can sit down and play the piano if you like):

Or the fantabulous kitchen: 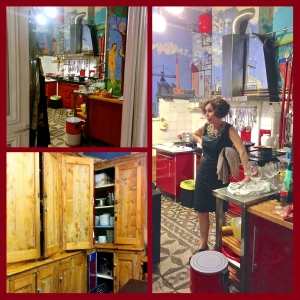 Our own Romantic Room had the original ceiling fresco and beautifully detailed etched glass.

Once again, we (I?) never get through anything without incident, so the building’s entrance and staircase (which may unfortunately perish to the necessary installation of an elevator) 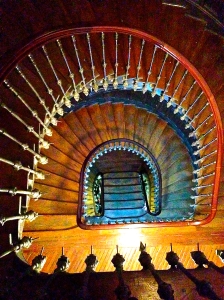 were the last things I (always looking at everything except where I’m going) was admiring before I missed the last step and OMG!

Have I ever mentioned my irrational (or rational) fear of stairs, which I’m sure will be my doom???

(Sorry about that image; it seemed appropriate after the chicken pox pic! And I do know some moisturizer is in order.)

The second unusual experience Miss I recommended only takes place in late July. It is the Fiesta de las Paellas (Paella Fair) in nearby Getxo. Hundreds and hundreds of residents gather to participate in a paella contest where prizes go to the most elaborate Gehry-like structures. It would have been really interesting if our customary late start hadn’t resulted in our getting there for the presentation of paellas #146 and later, which were not particularly impressive although they did get pretty large and include some architectural detail. 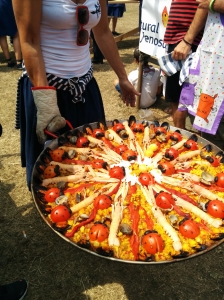 This is not merely an artistic competition; people also gather to spend the afternoon with friends and family eating their concoctions. 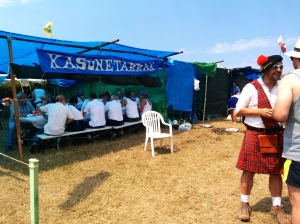 Asked why a paella feast when we’re not at all in paella territory, Miss I clarified that they were not part of the celebration until some drunk visitor introduced them back in the fifties, and it caught on. Popular mythology? I’ll let you be the judge. (Asked why someone was wearing some sort of Scottish kilt, she was at a loss for words.)

But here’s the thing: the general public (us) is not invited to partake. So we moved on to lunch at the Restaurante Cubita (pretty dang expensive but tasty enough prawns and clams).

Then, to complete the nineteenth-century industrial theme, I decided to take M & L to the Vizcaya Bridge, an impressive 1893 structure built by Alberto Palacio y Ellissague, a disciple of Gustave Eiffel. Now a UNESCO Industrial Heritage Site, it is the world’s oldest transporter bridge and still has a working gondola used by both passengers and cars to cross the river. Curiously, when I was there in 2010 with Miss H the iron was black, but now in 2014 it looks completely oxidized:

Might have made one think twice about walking on the floorboards, through which you can see all the way below to the water. (This time, as you can see, I was smart enough not to wear heels.) 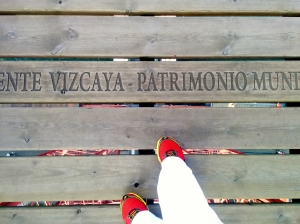 Mr. M didn’t much like any part of this. Hence his tight grip on both the railings and my back, and his firm leg stance.

And a churro stand! To Mr. M’s great delight (he had never tried them).

So anyway, that was that. We had to get back home sometime, and the bridge is really long.

(Miss I has now sadly migrated on vacation to Italy, where she will for the first time put her new sailing license to use; and Messrs. M & L back to Virginia–leaving me all alone to work. Have fun, my lovely loves!)

4 Responses to Bilbao Miscellanea I: With Notable Citizens, Feats of Engineering, a Palatial Paladar