Hondarribia and the Basque Coast: Sleepy Towns, Pedestrian-Tipping, Another Sip from the Holy Grail

Done with one visit, on with the next! Messrs. L & M arrived, and we immediately set off on a second road trip, on another Fiat Cinquecento. This time we drove directly to Donosti, and I won’t say anything more about it except to note…

a) The difference a tide makes in the Paseo LaContxa: 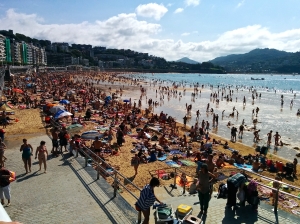 Waves no longer crashing against the wall, and people out on the beach en masse because they don’t always have that enormous stretch of sand.

And b) Lunch at fancy Kokotxa, which has a Michelin star and is quite tasty despite their unfortunate use of Google Translate or somethin’ on their web site, which thus proclaims that “located in a unique environment with marvebus views we arrange everythink for feel like at home.” We sat by an enormous airy window and had their 55€ 5-course Market Menu. It may not have been the best repast I ever had but it was damn good, and pretty:

And then we had “tea” (by which I of course mean cava and some other people mean vodka&tonics) with a view at the Hotel de Londres y de Inglaterra, because life is too short to sit under the scorching sun with The People.

So I would not be repeating the exact itinerary of a few days earlier, we decided to sleep in Hondarribia (Fuenterrabía), where I had never been. I figured out where to stay on the road, while Mr. M drove and Mr. L was all alone in the back because our out-of-control luggage didn’t fit in the tiny trunk, SO we had to knock down the rear seats and they got tired of me complaining incessantly about the suitcase that could very well slice my torso in two if we had an accident SO I got the front seat most of the trip. But that too is a digression, and the topic at hand is that I once again lucked out on the lodging.

The de-lightful Hotel Obispo, housed in a fourteenth-century palace, was to be had for 89€ (about US$120) my queen-sized bed room, and 166€ (~US$223) for the super-duper-fancy superior double Mssrs. L & M took. Air-conditioned (a must for me), although I should reveal that the thing kept turning itself off (completely) throughout the night and I had to get up twice to turn it back on. Also the temperature is controlled from the front desk and though I asked for 21º (69.8ºF) they kept raising it to 24º (75.2º). But that’s not the hotel; Spaniards in general have a conflicted relationship with climate control and other conveniences of modern life (like lavatories that use the full amount of water needed to actually flush clean–the latter not a problem at this hotel!). They’re ecological, you see, and as an American citizen I do admire that (we are light years behind).

Anyway, the place really was lovely and tastefully decorated not with a medieval theme, but around its genuine medieval structure:

Most charming is the garden where you can take your buffet breakfast (15€ but they make egg dishes to order and such) next to a waterfall fountain. And the Bishop has free wi-fi in all areas so if, say, your travel companions oversleep, you can always check your email over coffee. Several other amenities too, as detailed in their English web site: “Services Offer: Gratuitous Service of Bicycles. Service of Closed Circuit of Films Gratuitous. We Offer Articles to Him of the Country (Exhibitor-Gifts) to Prices of Cost.”

Priority #2, once again, was nourishment, and we headed to picturesque San Pedro Street, a tree-lined pedestrian promenade lined also with award-winning pintxo bars, as per this 2010 NYT article. Gran Sol and Vinoteka Ardoka are the best-known, but to tell the truth we just needed to sit after the long day (txikiteo is a standing-room-only activity) so we went to some other place across the street. Not a memorable meal but you can’t really go wrong with jamón ibérico de bellota and croquetas.

Next morning another late start (I may not even know any early birds), and a walk through Hondarribia’s sleepy streets 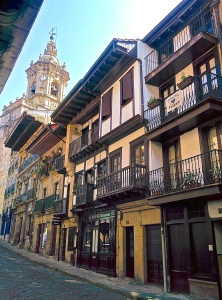 Then a brief detour east instead of west across the border into FRANCE! Hendaye is a rather unremarkable place except for its view of Hondarribia from the other side of the bay:

And St. Jean de Luz, also rather unremarkable although a bit more tourist-friendly. Where we had a nice lunch at some place de cuyo nombre no puedo acordarme on main street.

Unremarkable as our French detour may have been, it was tremendously illuminating for me, as I learned (I publicly confess) that the northern coast of Spain does not join the northern but the western coast of France (this after some debate about whether that might not actually be the southern French coast). That still blows my mind. (Don’t care if you think I’m stupid; I have a Harvard PhD.)

To see cuter French-Basque towns you have to head a bit further east or north or west or whatever to Biarritz and Bayonne–I’ve been to both and guarantee they’re worth a visit. But we did not have the time because our real goal for the day was to drive back to Bilbao through the northern Spanish coast. Not getting started until 4:00 p.m. meant we had to take the freeway part of the way, but at Zarautz (another stop for “coffee” at its long, long beach) we finally entered N-634, every bit as spectacular as California’s Route 1,

if a bit treacherous and sloooow-going at times (warning: do not watch video if you feel negatively about the words “oh, fuck”).

We managed to sort that part of the driving out, but once more could not get through the whole thing without incident. At Bermeo, our evil British GPS made us drive right into the pedestrian pier with its peaceful restaurant terraces (the very one on the web page to which I just linked).

Recalculating, she made us go through the steepest steep climb–none of which, naturally, the Fiat Cinquecento would have (yes, Miss R, you were right). The little engine that couldn’t (even with a/c turned off) would simply not make it up the hill with three suitcases and three overstuffed middle-aged adults, and kept rolling back down (dangerously onto the traffic that started accumulating behind us). It so stressed the normally imperturbable Mr. M out that when I timidly suggested Mr. L and I momentarily get out of the car he, ur, exclaimed that EVERYONE SHOULD STAY RIGHT IN THEIR SEAT!!! But the dismount was inevitable, and then the clunker accelerated so suddenly that Mr. L and I had to run madly behind. (Or maybe it was Mr. M who couldn’t stand us anymore.)

However, all’s well that ends well. We couldn’t stop at other stunning seaside towns (Lekeitio, which I’ve visited before, is particularly dear to me), but we made it back to Gastelugatxe!!!!! Not all the way up, but at least to the lookout from which we could behold a magnificent sunset (luckily this time of year around 9:45 p.m.)

I have no memory of what else might have happened that night, except that we somehow made it back to Bilbao and collapsed. Which is also what I want to do now. The rest of my adventures with Messrs. M & L must wait for another post.

1 Response to Hondarribia and the Basque Coast: Sleepy Towns, Pedestrian-Tipping, Another Sip from the Holy Grail