Off to London: The Baroness vs. The People

July 1st being the eve of the last summer travel of my forty-ninth year–a momentous occasion clearly warranting financial temerity–I spent my last night in New York at my favorite city hotel, the Standard High Line (“I see you have stayed with us before, Ma’am”). After watching the Tim Howard-Belgium World Cup game, I was seen off in style by the fun and funny Miss OohLaLa. While this was not at all what I initially had in mind, she was a stupendously good sport about being Plan B, and we enjoyed magnificent views at The Top of the Standard, 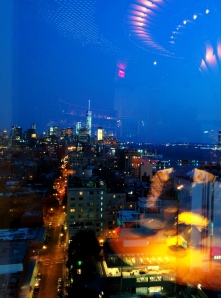 where they serve burger sliders with FOIE GRAS (which Miss OohLaLa is admirably too virtuous to eat) and gimlets made with FRESH LIME JUICE, as our wonderful server twice proudly announced, perhaps hinting at underworld contacts. I for one felt very Ocean’s Eleven. And what else can one ask of life.

To all who, like me, have no offspring whose inheritance to safeguard, I recommend the experience of being done with all travel preparations two days in advance and hotel-luxuriating by floor-to-ceiling windows overlooking the Empire State Building

on your last morning at home before heading off to the airport in car-service comfort, instead of doing last-minute errands in sweltering 105°F Real Feel heat.

And then you can let me know what it’s like. As if the universe sought to remind me that I belong to The People, not only did excess sweat force an unscheduled clothes change in my office (home committed to subletter), but the Virgin Airlines flight I excitedly purchased under the title of Baroness

was operated by Delta Airlines. It was jam-packed and delayed and served a heteromorphic mystery pasta that I refused to eat. But I did sit next to a nice English chap with a Chemistry PhD who told me his company makes swot (“what?” “swot” “sought?” “swot” “swords?” “SALT!” “OOOOOH!”) SALT. Cornish Sea Salt, which he says is much better than Maldon because it is not made in an estuary but in the open Atlantic sea (just relayin’; I am of course getting myself a bottle and will report later). After telling him I always carry a miniature salt mill in my purse we struck up a spellbinding conversation, and his Big Bear good looks also moved me to do everything possible to use him as a pillow. To which, in typical British character, he reacted very graciously. It was very romantic, for a few hours. And what else can one ask of love.

Flash-forward to London past the border control officer who allowed me into the country even after asking what my conference is about (“Wrongdoing” “Wrongdoing?” “Yes, like, criminals”); past the 90£ (90£!!!!!!!) black cab from Heathrow to the lovely two-star Tavistock Hotel, which is very clean. And  has internet on the ground floor. And eight-inch-wide twin beds. And views that redefine the word “breathtaking”:

The People win. I’m one of their own.

To dinner at the Norfolk Arms pub, which, in the Mediterranean pub tradition, has a bunch of hams hanging out front 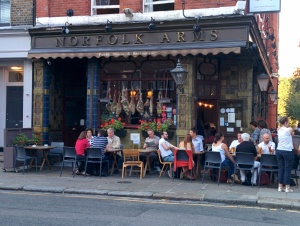 and a very suave Armenian waiter named Mario who claimed to have as much wine as it would take “to satisfy me” (aha, right).

Tomorrow things get serious. Academia, academics, no more frivolity for some time. Wrongdoing shall be thoroughly analyzed, if not actually performed.

3 Responses to Off to London: The Baroness vs. The People